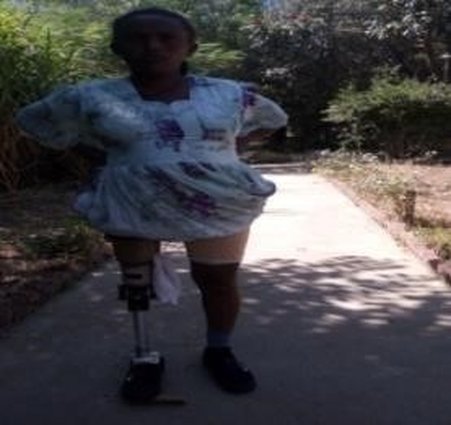 ​Abrehate Cheal was a Cashier living in Mekele, Ethiopia. In 1990, Ethiopia was a nation fighting against their government. Demonstrations and protests would occur in the city; some of these protests would turn violent. One of these violent protests broke out in the middle of the street. A shooting occurred in Mekele. Abrehate was a victim of the shooting and took a bullet in her right leg and passed out. When she awoke, she found herself in the hospital.  Unfortunately, she did not get the treatment she needed to take care of the wound. The bullet wound became infectious and soon her leg needed to be amputated. This made life hard for Abrehate as she had to walk a long distance by foot to her job. It was difficult for her to find a suitable crutch and prosthesis that would help.
Soon, she heard about a clinic that was partnering with Limbs that was helping amuptees with affordable prosthesis’. She asked to be taken to the clinic where she was fitted for her limb. Now that Abrehate has her new prostheses, she is able to travel the distance easier as she returns to her workplace.
TRANSFORMING LIVES ... ONE STEP AT A TIME