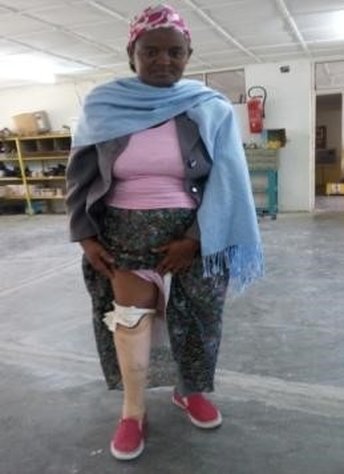 ​Azebe Mekonen is an accountant living in Mekele, Ethiopia. Ethiopia was a nation fighting against their government. Due to the previous war, there are a number of scattered and hidden landmines throughout the Mekele area left by rebels. One day, as she was walking to work, she stepped on a landmine and lost consciousness. She awoke to find herself in the hospital with her right leg shattered. The doctors were unable to give her the care she needed and the tissue in her leg became infected. Over time, the infection became gangrenous. She needed an amputation and was given a prosthetic leg. The prosthetic was very heavy and uncomfortable for her. Some days, her prosthesis was so uncomfortable, she would have to stay home. Unfortunately, this caused Azebe to lose her job. She and her children struggled as she could not care for them as she used to.
When she heard about the clinic in Mekele that was partnering with Limbs, she had hope. She made her way to the clinic and was fitted and given physical therapy. Now, she has a new, lighter, and better fitted leg. She can now return to the workforce and is excited to be able to provide for her children.
TRANSFORMING LIVES ... ONE STEP AT A TIME