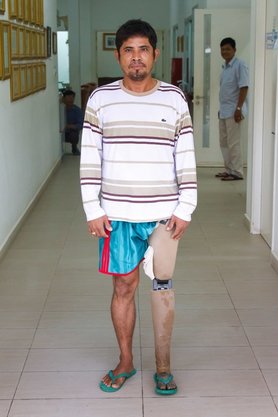 ​Chhom Savuth lives in Cambodia. He went to work at an auto repair shop in his town. His life was normal. Working in an auto repair shop, he was exposed to all kinds of sharp objects, oil, dirt and other contaminants. One day as he was working, a sharp object fell and cut through his jeans. Chhom obviously felt pain where the object made impact but was not too concerned with the rip in his jeans, but what he didn’t know was that the object had made a small cut in his leg. After a hard day’s work, the cut was exposed to bacteria, but it was so small that Chhom didn’t bother to care for it and clean it. It wasn’t until an infection had set in that Chhom went to go see a doctor. The doctor tried to care for it as best he could but it was too late. The infection had begun to spread and turn gangrenous. In order to keep the infection from spreading, the doctors amputated his leg.
Chhom knew he needed to find a replacement if he wanted to continue working and surviving. He used seven devices over the years. There was never a good fit for him though. The legs would either break, or be too loose or they would be improperly fitted causing him to walk awkwardly. However, replacements were not a concern since he lived near the clinic. After seven attempts at finding a well fitted leg, he went to a clinic partnering with Limbs. He was fitted for a Limbs leg and given therapy. He now looks forwards to walking normally.
TRANSFORMING LIVES ... ONE STEP AT A TIME