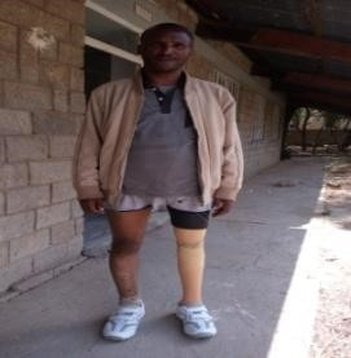 ​Desta Bevene is an accountant living in Mekele, Ethiopia. In 1990, Ethiopia was a nation fighting against their government. Demonstrations and protests would occur in the city; some of these protests would turn violent. One of these violent protests broke out in the middle of the street.  A shooting occurred and Desta was caught in the crossfire. He tried to duck out of the way and get to safety but a bullet had entered his leg causing traumatic injury to his left leg. He reached a hospital as soon as he could, but over time an infection set in and caused the need for his leg to be amputated.
Desta struggled with his one leg. Getting from destination to destination was difficult, and finding a steady set of crutches and being fit with heavy, weak legs was not helping the matter. Desta soon learned about a clinic that was partnering with Limbs in Mekele. Desta was soon fitted and received treatment. With Desta’s new leg, he will be able to work and walk again.
TRANSFORMING LIVES ... ONE STEP AT A TIME