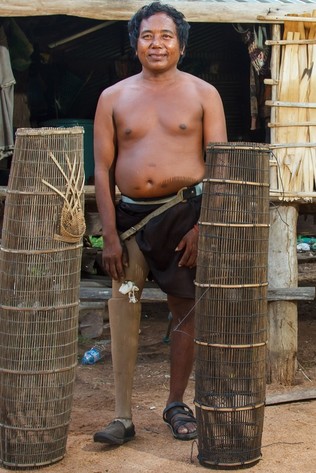 Dork Savorn is a farmer and hunter living in Cambodia. He is a husband and father to two daughters. During his day, he would leave early in the morning and set out traps in the water to catch fish and frogs. He would farm during the day and then go back at night to go gather the fish and frogs to feed his family and sell the frogs in the market in town. The area had been dotted with hidden landmines from a previous conflict. Unfortunately, one of these mines had been buried along Dork’s path. As he was walking down a path on his way to market, he stepped on a landmine and blacked out. When he woke, he was in pain and saw his leg had been torn apart by the blast. There was nothing the doctors could do to reverse the damage. An amputation soon followed.
Dork received his first prosthesis in 2003. However, the leg felt heavy carrying his 30 liter water jugs. To and from his farm. The weight drained him of his energy and made him uncomfortable. He then heard of a clinic partnering with Limbs that would help him be fitted for a knee and provide him with physical rehab. He was extremely happy with the Limbs leg he received. He feels the knee works better and is more stable. Now he is able to work and provide for his family
TRANSFORMING LIVES ... ONE STEP AT A TIME