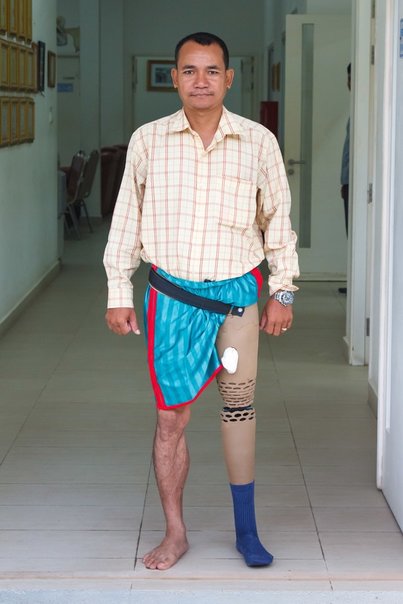 Hem Heng is a police officer living in Cambodia. He worked very hard at his job to make the community safe. While he was making sure everyone else was safe, he was not able to ensure his own safety. As he was patrolling the street one day, a driver was not paying attention to their surroundings. He slammed into Hem, and ran over his legs. Hem was rushed to the hospital immediately. One leg was able to be reset and healed, the other leg was a bit more difficult. The doctors tried to heal Hem’s leg as best as they could. The tissue in Hem’s legs started to die and rot. The doctors needed to amputate Hem’s left leg in order to save him.
​For five years, Hem tried to get along as best he could. It was difficult to do his job due to stairs. He knew that crutches weren’t going to make his job easier so he went to a local clinic and was quickly given a leg. While the leg worked “well enough”, he still didn’t feel comfortable. He had heard about the clinic in town partnering with Limbs. He debated on whether he was going to settle for “well enough”. Finally, he entered the clinic and was fitted for a Limb. He feels better in his new leg and is focusing on doing his job.
TRANSFORMING LIVES ... ONE STEP AT A TIME