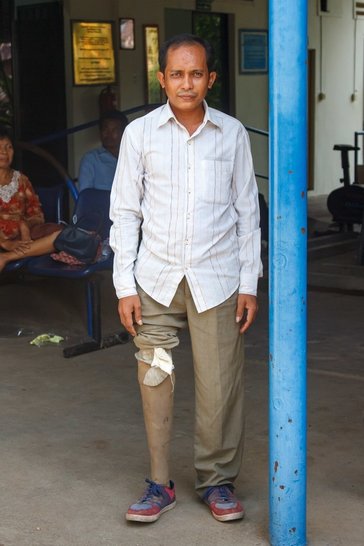 ​Heng Mao is a Security guard in Phenom Penh Cambodia. He used to think if anything were to happen to him, it would happen on one of his patrols. One his way to work, as he was crossing the street, a driver was not paying attention and did not stop. He slammed into Heng and ran over his leg. Heng was rushed to the hospital, but his leg was crushed. The tissue in his legs started to become infected and die. The doctors amputated his leg in order to save him.
He tried his best to adjust to his amputation. However, it was difficult to work with crutches for long hours. Heng finally decided to he needed to make a change if he wanted to continue to do his job. Went to the clinic partnering with Limbs where he received his leg and physical rehab. Since receiving his leg, Heng has had an easier time working at his job.
TRANSFORMING LIVES ... ONE STEP AT A TIME