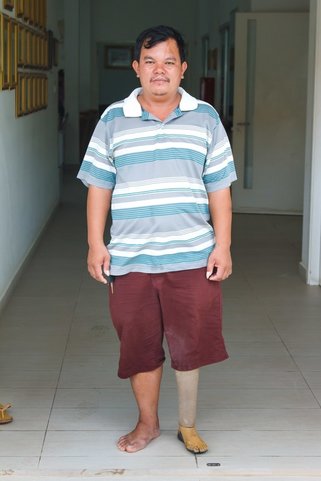 ​Hun Thol lives in Cambodia. He enjoys his job working on the corner selling phones and going around his community repairing phones. One day as he was walking, he accidentally stepped on some glass and cut his foot open. He felt he could make it through the rest of the day, and continued on. He tried to clean out the wound when he returned home, but it was not completely cleaned. A small infection had set in and before Hun knew it, the infection became gangrenous. He went to the doctors, but the doctors told him there was nothing they could do. They needed to amputate his leg in order to keep the infection from spreading.
Since his job depended on him walking from house to house repairing phones, Hun went right away and was quickly fitted for a leg. The leg got him around from place to place but it felt uncomfortable. One day as he was walking, his leg collapsed and he fell. He needed a new leg, but he didn’t want the same leg. He went to a Limbs partner clinic and was fitted for a leg.  Since receiving the leg, he is able to walk with more comfort and feels more confident as he walks to work every day.
TRANSFORMING LIVES ... ONE STEP AT A TIME