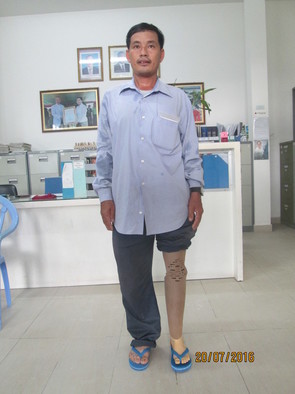 ​Kat Yareun lives in Cambodia. He was a very active young man. He liked to run and play volleyball with his friends. Landmines dotted the area after a previous war. One day as Kat was walking to town, he stepped on one of these landmines. Kat was rushed to the hospital. Unfortunately, the blast had torn apart the tissue in his legs. They were not healing like they needed to and the tissue began to die. An amputation soon followed.
Kat did not want to spend his life on crutches. He wanted to return to his active lifestyle. He went to local clinic and got leg. The leg seemed to work for a time until some screws came loose in his knee. Kat made his way to a motorcycle repair shop where he got some repairs to his knee. He struggled to keep his knee together and repaired it when he could, but it became frustrating for him. He grabbed his crutches and would only cook and clean around his house. He was not happy this way.  When he heard about the Limbs partner clinic, he decided to give it one last try. He went and was soon fitted for a new leg. Kat hopes to be able to return to the workforce to provide for his family and become active and play volleyball with his friends again.
TRANSFORMING LIVES ... ONE STEP AT A TIME