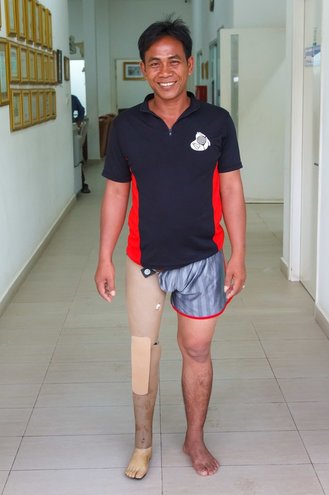 K​ung Sochea lives in Cambodia. He works very hard to survive. During the day he walks to go to work as a carpenter. Later on in the evening he works as a bus driver and then walks home late at night. One day, as he was walking, he accidentally stepped on some broken glass. The glass made a small cut in his foot. Kung was on his way to work and thought he would deal with it once he returned home that evening. During the day, the cut became moist and bacteria entered the wound. Even though Kung had cleaned the wound the evening, an infection soon set in. The infection started to grow and become gangrenous. Soon, Kung needed to go to the hospital where his right leg was amputated.
Kung adjusted as well as he could. He used crutches to go from job to job. He then heard about a clinic that was partnering with Limbs. He went is and was fitted for a Limbs and received some physical rehab. Now with his new limb, Kung feels more stable and knows can walk farther and easier back and forth to his jobs.
TRANSFORMING LIVES ... ONE STEP AT A TIME