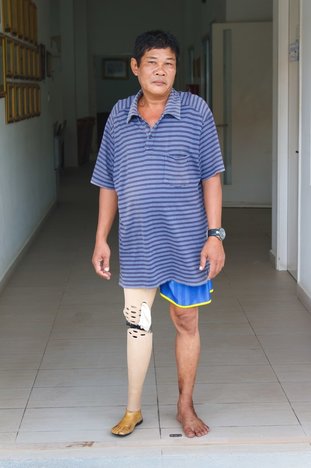 L​or Sotheavy worked as a tuk-tuk driver in Cambodia. He enjoyed his work even though there was quite some ways to travel on foot. Landmines dotted the area after a previous war. One day as Lor was walking to town, he stepped on one of these landmines. Lor was rushed to the hospital. Unfortunately, the blast had torn apart the tissue in his legs. They were not healing like they needed to and the tissue began to die. An amputation soon followed.
After the amputation, Lor needed to find a way to get around. He went to various clinics, but they rushed him through the process of getting a limb. While the limbs he received worked, he never felt comfortable wearing them. Lor needed a new prosthetic every 2 years. After a few years of trying to manager with these limbs, Lor found himself unemployed. He went to the clinic that partnered with Limbs and he was fitted and received physical rehab. Lor says he feels like he has more trust in the knee and is able to walk further with this limb.
TRANSFORMING LIVES ... ONE STEP AT A TIME