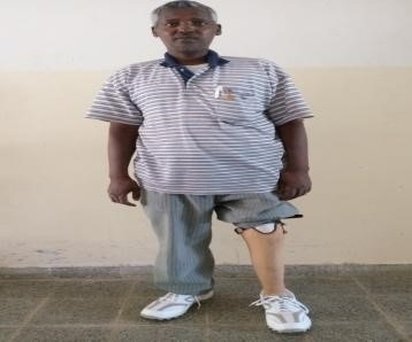 ​Marifu Salhe is an archive living in Mekele, Ethiopia. Due to the previous war over the years, rebel soldiers used landmines and scattered and hid them throughout the area in Mekele.  At 29 years old he became victim as he was walking to work when he stepped on a landmine. Marifu was found unconscious and was quickly taken to the hospital. The doctors did as much as they could but the left leg was too damaged to be treated and needed to be amputated. After being amputated for his left leg, he realized his right leg was left highly affected due to inadequate care, making it difficult and painful to walk.
Over time, he used various ways to get around but it was difficult for him to get out of the house without a substantial amount of pain. He heard about the Limbs partner clinic in town. He gritted his teeth through the pain and made his way to the clinic. Now with his new leg, he is able to get the physical therapy he needs and will be able to walk easier.
TRANSFORMING LIVES ... ONE STEP AT A TIME