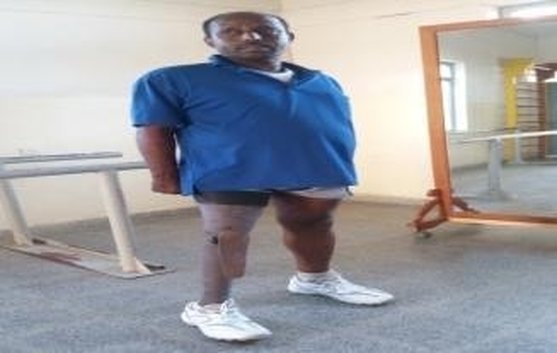 ​Neguse Berhane is a wood worker in Mekele, Ethiopia. Due to the previous war over the years, rebel soldiers used landmines and scattered and hid them throughout the area in Mekele. While taking a walk around town one day, Neguse accidentally stepped on a mine and severely injured his right leg. He blacked out for a time, but then woke to find himself in the hospital. The doctors tried their best, but the blast had severely traumatized the muscle tissue in his leg. The leg had begun to grow an infection and soon the doctors needed to amputate his leg in order to save his life. He wanted to keep working so Neguse had tried prosthetic legs in the past from various doctors and clinics, but due to his work behavior and body weight, his prosthetics would be broken easily.
Neguse heard about the clinic partnering with Limbs. He had tried other clinics so he wondered what the harm would be if he tried this one for a leg. He visited the clinic and he has received a stronger prosthesis. Now he will have an easier time at work and will be able to build himself up to his full potential once again.
TRANSFORMING LIVES ... ONE STEP AT A TIME