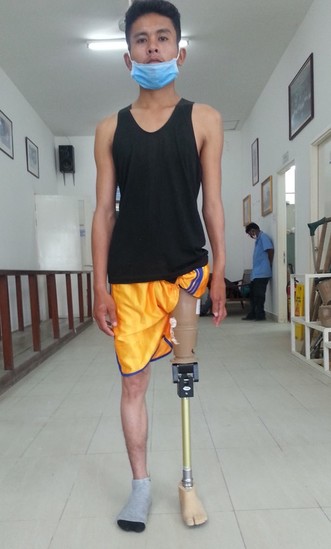 ​Noem Sambath lives in Cambodia. He lives a peaceful life working at a motorcycle repair shop. Like any job, the occupation came with risks. One day while Noem was working, he brushed against a sharp object in the shop. The object gashed his thigh. Noem went home and washed it out with water but the gash was not fully cleaned. Hoping the wound would scab over and heal on its own, Noem left the wound alone. The gash did not heal correctly and it became infected. Soon the infection started to spread and Noem made his way to the doctor. The tissue in Noem’s leg began to rot and die off. In order to save Noem’s life, the doctors amputated his leg.
Noem still wanted to work but he knew it was not going to be possible to work without a replacement limb. He went back to the hospital and received a prosthetic limb. It worked for a little while but it never felt quite right. Noem went through 5 devices and he started to lose confidence in himself. Then a friend told him about a clinic nearby that was fitting amputees for limbs. He was taken there and was fitted for a leg. He said once he put this leg on he felt immediate confidence walking with the Limbs leg. Now he is able to work and walk easier and gain the confidence he once had before.
TRANSFORMING LIVES ... ONE STEP AT A TIME