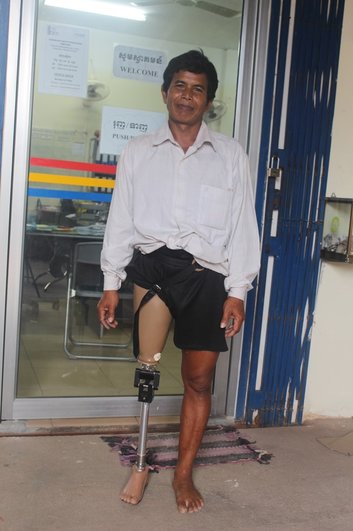 N​orng Sami lives in Kampong Chhang, Cambodia. During the day, he goes to work at a carpentry shop. When the work day draws to a close, he goes home and tends to the family farm. Conflicts among rebels and law enforcements were common in the city. Shootouts would regularly break out in the streets. One of these shootouts occurred in front of Norng. He tried to run to safety, but a bullet entered his thigh and Norng blacked out. He woke to find himself in the hospital. The doctors tried to carefully watch and care for the gun shot wound. The damage was too great. The tissue around the wound began to rot and die. In order to save Norng’s life, the doctors chose to amputate his leg.
Life was harder for Norng afterwards. He wanted to go to work but it was difficult to balance on one leg or crutches when he worked. He soon heard about a Limbs partner clinic near him. He went to the clinic where he received a leg and physical rehab. Thanks to the efforts of donor’s, Norng enjoys his returned stability and is able to walk further.
TRANSFORMING LIVES ... ONE STEP AT A TIME