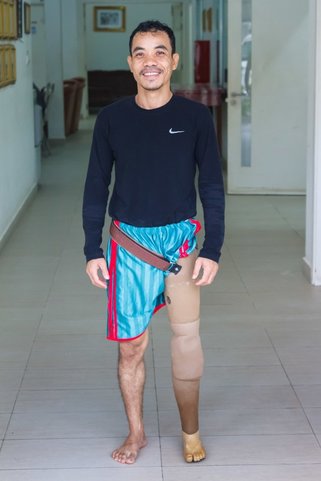 P​en Sokhon lived and worked in Cambodia. He worked as a phone technician for his town. One day as he was driving to work, another driver was not paying attention and slammed into Pen. Emergency responder’s managed to pull Pen from the wreck and transport him to the nearest hospital. The doctors did what they could, but the bones and tissue in Pen’s leg were crushed and torn up. There was no other way to help Pen but to amputate his leg.
Pen went to another clinic after he was released from the hospital. He received a limb from another clinic. He was able to walk on it but he did not feel very stable. He decided to try something different. He went to a clinic that was partnering with Limbs. He was then fitted for his new leg. Now that he has his new leg, Pen is able to walk and feel more stable.
TRANSFORMING LIVES ... ONE STEP AT A TIME