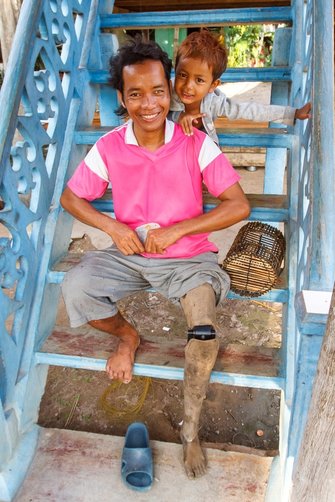 ​Phay Suy is a loving father and husband that lives in Cambodia. He makes a living hunting for frogs and collecting firewood to sell at the market to provide for his wife and five sons. One day in 2012, he was walking to market to drop of his captured frogs. As he was crossing the street, a driver was not paying attention. He ran the stop sign and slammed into Phay. Phay woke to find himself in the hospital with his right leg crushed. The doctors attempted to reset and repair the leg but the damage was too great. The tissue in his leg started to die and the doctors amputated his leg.
Soon after he was released from the hospital, Phay went and was fitted for a leg. The leg helped him with walking but after some time working around water, the leg began to squeak. This was frustrating Phay since the noise was scaring away his prey. Phay went back to the clinic, but they turned him away. Phay started looking into other clinics in the area and happened across the clinic that was partnering with Limbs. After he was fitted with his new prosthesis he was able to work around his home and hunt again to provide for family.
TRANSFORMING LIVES ... ONE STEP AT A TIME