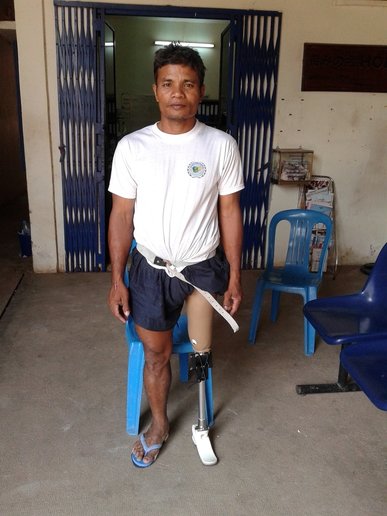 ​Pov Sopheak is a security guard in Kampong Chhnang, Cambodia.  When he is not at work, he tends to his family’s farm. Landmines dotted the area after a previous war. Pov stepped on one of these landmines. Pov was rushed to the hospital. His bones were broken and some of his tissue was torn apart, but the doctors felt they could reset his leg and he would heal. That seemed to be the case for a while. Pov went on to work as normal for two years, until he noticed some discoloration on his leg. He took himself to the hospital. After the doctors looked at it, they discovered that the tissue that was torn by the blast had not fully recovered. The tissue was starting to rot and die. In order to save Pov’s life, they amputated his leg.
Pov was unable to get proper care after his amputation. He received a prosthesis but it didn’t look anything like a foot. It was hard for Pov to put the prosthesis in a shoe and walk. The leg was clumsy and heavy and it took a lot of effort and energy for Pov to get from one place to another. After coming across a clinic that was partnering with Limbs, Pov was refitted for LIMBS leg. After some physical rehab, he walked out of the clinic smiling. Thanks to the efforts of donors, Pov is now able to walk easier and feel more confident with his prosthesis.
TRANSFORMING LIVES ... ONE STEP AT A TIME