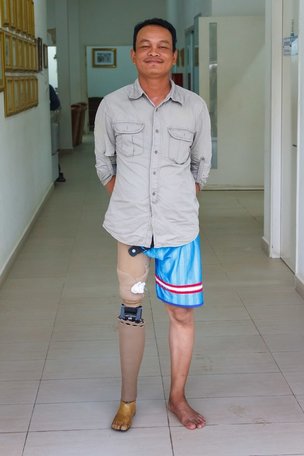 ​Sem Savon lives in Cambodia. He lived a normal quiet life as a Tuk Tuk driver. Sem did not know how he got the cut, he just noticed that a small cut on his leg was showing signs of infection. As is often the case in the developing world, he thought it would heal on its own and even as it got worse over the next few weeks he did not seek medical attention. When the pain in his leg became unbearable, he finally went to the hospital where the doctors informed him that gangrene had set in and they would have to amputate his leg in order to save his life.
Without his leg, Sem found it difficult to make it to work every day. Eventually he lost his job and wondered what his next move was going to be. That’s when he heard about a clinic that was partnering with Limbs. He went to the clinic and was fitted for leg and received physical rehab. Now with his Limbs leg, Sem is able to be active around his home and now goes to work selling food to passersby.
TRANSFORMING LIVES ... ONE STEP AT A TIME