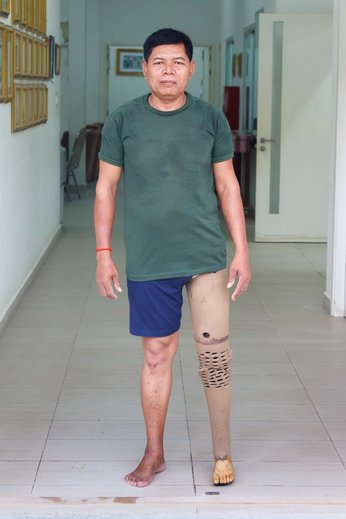 ​Sor Chan is a construction worker living in Cambodia. Working in a construction field, risks for injury are everywhere and can happen with almost any object on the site. This was the case when in 1986, Sor was assisting a coworker with a nail gun, a nail was accidentally shot through into his leg. For fear of losing his job, Sor pulled the nail out and wrapped it up and continued working. Once he got home, Sor washed the wound with salt water and waited for the wound to heal on its own. Over the next few months, the wound became infected and dark and sent pain running up his leg. Finally, he was told to go to the hospital. The doctors told Sor that his infection had become gangrenous and that they needed to amputate his leg in order to save his life.
Sor was not going to let his amputation keep him from working. He received a leg from a different clinic in town but it never felt quite right. He did not feel confident at work. Finally, he decided to go try a limb from a partnering Limbs clinic in town. There he was fitted for a new leg and was given physical rehab. Now with his new limb, Sor can begin building his way back to working comfortably and confidently.
TRANSFORMING LIVES ... ONE STEP AT A TIME