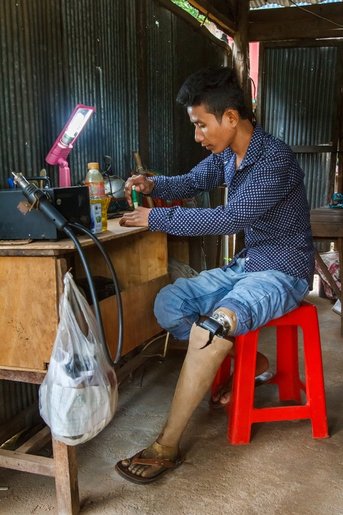 ​Touch Chan lives in Cambodia. Touch works very hard repairing phones around town and selling phones in a small rental shelter on the roadside. His family is very poor so Touch sends a good portion of his earnings to his family in the countryside. One Day as Touch was walking to a client in town, he accidentally stepped on some broken glass. The glass went through his sandal and made a cut in his leg. Not wanting to be late for his client, Touch went about his day and then cleaned the wound when he returned home for the night. He had hoped that the wound would heal on its own. This was not the case. The wound became infectious and started to rise up Touch’s leg. Touch went to the hospital. Unfortunately, the doctors told Touch that the infection was becoming gangrenous and the tissue in his leg was starting to rot. In order to save his life, the doctors needed to do an amputation.
After the amputation, Touch only had his family on his mind. He knew he needed to find a way to keep working so he could keep sending them money. He went to a local clinic, where he was given a leg. The leg got him from place to place, but it felt very stiff to walk in. The leg was also very heavy and required a lot of energy from Touch. He would return every night exhausted. He knew if he didn’t find something lighter he would burn himself out. Touch decided to go to a clinic that was partnering with Limbs. He was then refitted and given physical rehab. Thanks to the efforts of donors, Touch now gets to walk with a much lighter leg and gets to work more to provide for his family
TRANSFORMING LIVES ... ONE STEP AT A TIME