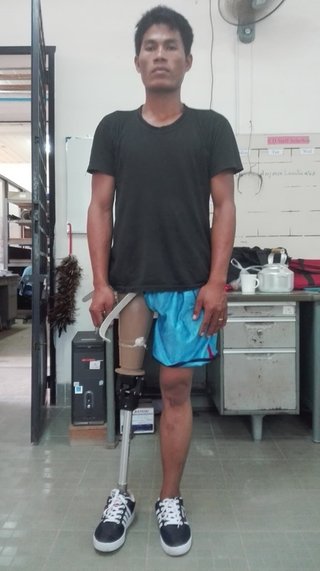 U​m Sophay lives in Cambodia. He and his father rented a small shop where they ran a successful motorcycle repair business. Um was content with live and never knew that his life was about to change. One day as Um and his father were driving on their way to work, another driver was not paying attention and ran through a stop sign, crashing into Um. Um and his father were taken to the hospital. Um’s father was treated for some slight bruises and scrapes, but Um was not so lucky. The impact was directly on Um’s right leg. His leg had been crushed. The doctors tried to reset his mangled leg but the damage was too great. The tissue began to die and the doctors needed to amputate in order to save Um’s life.
After amputation things went downhill. Um tried to keep up with his father at the shop. There were plenty of work to be done that Um could sit on a chair and do. In Cambodia, amputations and defects are looked down upon. They are seen as less than, and burdens. People with these amputations and disabilities are often discriminated against. Um’s landlord found out that he had an amputation and refused to let him continue renting the space. The father tried to fight for the space and explain how Um could still work and bring in profit for them and the landlord. The landlord refused to listen and Um and his father were evicted from the shop. Um started to lose confidence in himself. Finally, after a few months his father decided that they would open up their own shop and run it out of their garage.  Um tried to help in the shop and also did a few chores on the family farm. Since things started to smooth out again, Um decided to try and find a lighter leg. That’s when he went to a clinic that was partnering with Limbs. He was then given a leg. As soon as he put the leg on, he was convinced he can walk further and maintain better stability and is happy using the leg.
TRANSFORMING LIVES ... ONE STEP AT A TIME