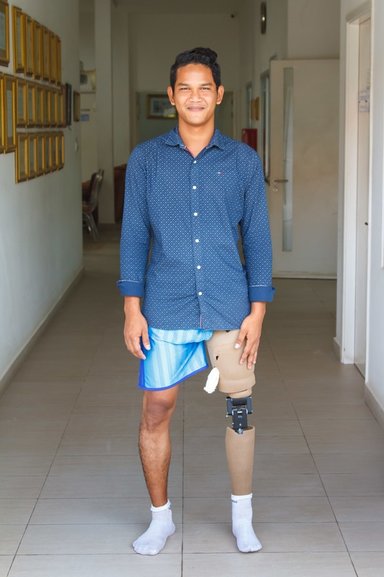 Y​en Ramo works at a magazine in Phnom Penh, Cambodia. He led a very quiet life. His life was about to change when he was driving to work one day. Another driver was not paying attention to the stop sign and they slammed into Yen’s car. Yen blacked out and was soon taken to the hospital. When he woke up, the doctors told Yen that the impact had severely damaged his leg and there was no possible way they could reset it. If they left the leg alone, an infection would set and spread from the dying tissue in his leg. The only way to save him is to amputate is leg.
After Yen’s amputation, life was difficult for him to adjust. He went to a local clinic in town and was given a prosthetic, but he felt heavy and tired. Sometimes, he was too tired to even make it to work. Once the prosthetic he received started to wear down, Yen decided to go to a Limbs clinic. He was then fitted for a new leg and was given physical rehab. With Yen’s new leg, he is able to return to work and feels lighter and in control of his life.
TRANSFORMING LIVES ... ONE STEP AT A TIME